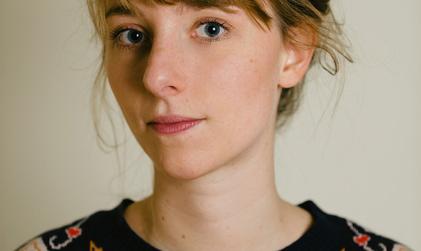 Bucsi is a Hungarian animation filmmaker who graduated from MOME (Mohology-Nagy University of Art and Design in Budapest), developing her art into the creation of irrational worlds. Her films have been screened at many festivals such as Sundance, Berlinale, SXSW, etc.

Her most successful shorts are Love (2015), premiered at the Berlinale and screened at SXSW, awarded at Friss Hùs in Budapest, and Symphony No.42 (2014), shown in competition at Sundance, Berlinale, IndieLisboa, Hong Kong, and winning 45 awards worldwide. 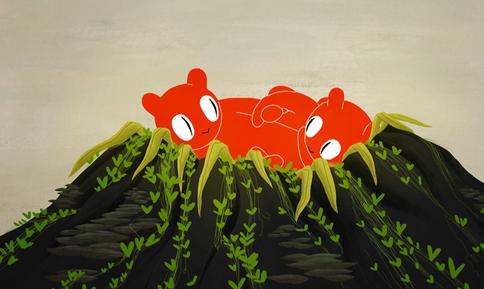 Millard was born in Malvern, UK, and ever since he took a one-year course on life drawing exercises at the then Malvern Hills Art College, he has never been the same.

Currently working part-time at the Natural History Museum and using the money to finance his films, Peter told us, "I make my films because I love making them".

Yes, everyone could see that. At least everyone who was present for at least one screening at VIS this year. At the beginning of every presentation, there it was. Peter's work, in a nutshell, displayed as this year's festival trailer. Keeping a nice balance between its flashy qualities, those of an ice cream truck symphony inviting everyone's attention, and the celebratory energy of a magnificent festival, the trailer infused an incendiary humorous reaction in its audience.

We asked him what came to his mind when he was proposed to make the trailer for VIS: "VIS is one of my favourite festivals, so to be asked was a great privilege. I also thought they were mad to let me have complete creative freedom, but that shows they trusted me and that means a lot. I’m not sure I could make what I do without my complete control. I’ve tried to do bits and bobs for clients, but they become too controlling of what I’m doing so I’d like to stay away from that side of animation for now."

After studying at the Royal College of Art, Peter settled down in North London where he currently keeps a studio. Encouraged by teachers to remain on the looser, faster pathway of drawing, he was shown the work of artists such as Jonathan Hodgson and Bruce Bickford and led to pursue that sort of absurdist animation.

Until now, he has made more than 20 animated films, all of which are hand-painted, short and somewhat surrealistic, apparently using the rhythm of music as the starting point. They are chaotic, bright and colored, and taken to the limit of emotion. He has a language of his own, where fast-paced riots of animals, fruit, human figures and household objects he features, go out of their way to turn everyday life into a child’s drawing, roaring from within. There’s jazz music and classical symphonies, car horns and low male voices, guttural sounds and yelling.

Nothing so crude and colourful has ever been displayed together and come to build a firm body of work that resonates as being this refreshing and somehow even enchanting. Having these screened all over the world on various platforms from festivals to galleries, Millard has gone off to get recognized for both the excellence and dissonance of the form of animated short film. But don’t be mistaken, he told us, “You could equally find a number of people that would say the opposite about my work, which I also like.”

In her latest short, Love, there is a very strong poetic power in the universe depicted. As Bucsi said, there is no explicit message within it, one emotion connects and at the same time tears us apart.

“My main goal was to capture a feeling. It is mainly a film about atmosphere, a cycle of emotions leading from A to B. Love seems to be a constantly changing and pulsating feeling with many different forms. I think it is pretty unpredictable, and superficially thinking, we are supposed to always know when if we are in love, there is that common understanding of it that makes it so strange and interesting for me to try and capture that universal feeling.”

After the artistic residence at the MuseumsQuartier, we asked her what was coming next in her world and if she was thinking of dedicating herself to a feature-length animated film?

“I’m getting more and more interested in a feature film. I will still be busy with some more small projects, but maybe next year I’ll start developing something longer and see how that goes.”

After the MuseumsQuartier experience, Bucsi and Millard put their heads together and produced a one-minute animation, titled Don’t Know Where Going, which truly does allow for the brain muscle of animation and its many various processes to shine through. ​ 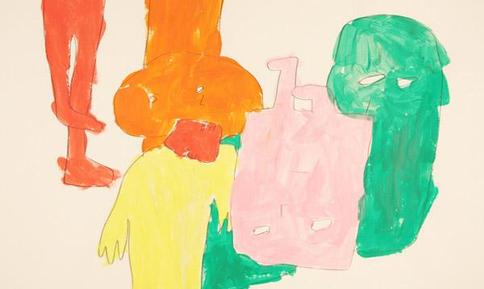 “I’ve always done a lot of comics since I was a child, I was constantly interested in combining drawing with some sort of story”, Bucsi told us. A complete artist: writer, director, designer, and editor, permanently getting inspired by the world around her, the decisions she’s been making for her stories have always been intuitive. “I try to observe myself and my drawings as much as possible, see what feels right. I can easily see if a character is actually interesting in some way. I draw the character and then decide about what it could do.”

Her more recent short films have a very gentle dream-like texture. A question arises: does she live the process of making a film as intensely as her characters are?

“In the beginning of the process, I live it in a very intense way. Then there is always a very focused and planned process, which says a lot about the craft itself. I’m trying to enjoy all the parts of producing the film, not only the most creative bits and pieces. If I feel strong for an atmosphere or character, and really want to see it move, then I can easily spend a year only in that scenario. I don’t mind working a long time on one thing if that project becomes what I want it to become.”

Bucsi’s films feel lightweight but tackle strong subject matter. It probably comes from her self-professed lack of inclination to be very rational in the experimentation of how to deliver a message: “I don’t put down any additional meaning to the things I draw, that happens naturally anyway. I just put on screen what I think is fun, loveable or sad, or anything interesting.” ​​ 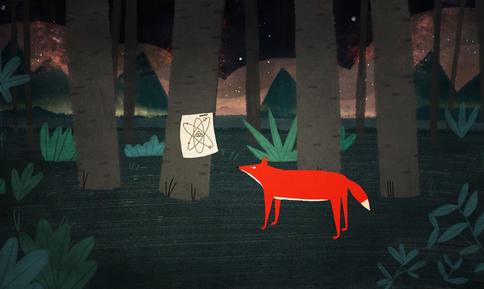 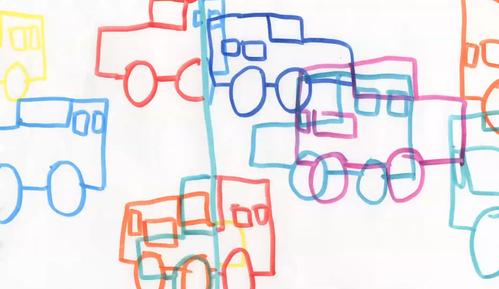 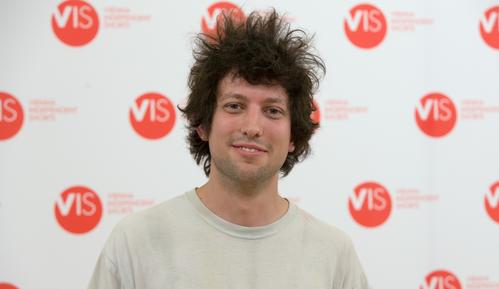 The Intricacies of Imagery: They Know Where Going

Many are those who speak of bravery when referring to delving deep into a career in comedy. But in a world as reliant on the artificial support of technology as ours, we could say within the film sub-world, comedy has been shifted by the physicality of animation and its due interpretation.

At this year’s Vienna International Shorts, we were present for many speeches about the significance of the shorter form of film. And nothing better than watching the work of the young and talented pairing of Peter Millard and Réka Bucsi, emerging experimental animators and film-makers, to understand why they were chosen as two of this year's Artists in Residence at VIS. Here they also developed an installation together, with Millard holding a workshop and Bucsi curating a program for young audiences at the same time while living the artist’s life at the MuseumsQuartier in beautiful Vienna. So, not only was the shorter format being consecrated, but we saw it grow into a living organism with them, ready to be devoured.

​Putting together his tumultuousness and her attention to aesthetic, Millard and Bucsi created something out of each other – the process of the project was based in pure collaboration wherein each would draw a line on a piece of paper and pass it along until something remotely similar to a figure appeared – that is so inspiring as to motivate younger filmmakers to try it for themselves. Based on the insecurities and hardships of youth, Don’t Know Where Going only emphasizes how both artists know exactly where they’re heading.

Their short animation film will be exhibited throughout June alongside the single frames and paintings at MuseumsQuartier.

From the popular Boogodobiegodongo (2012) and, more intimately, his most recent film Unhappy Happy (2015), there is a focused energy, very concentrated and yet so troubled and schizophrenic to a point that our immediate thought was that he could have been a musician. When we asked him about it, he said, “I’m not sure the music helps find the humour as I think that’s quite a natural thing that develops the more I work on a film, but it definitely helps keep me going. I like to animate standing up, so anything that gets me moving is always good and that probably comes across in the drawings.”

Having his career flourish on platforms such as those of film festivals, we asked him about the role of VIS in a young filmmaker’s path.

“It’s completely essential in meeting new people. I’ve met so many great people at festivals and I still find it very humbling that people like to screen my films knowing that they are going to have people with very contrasting views about my work. But yes, without the support and encouragement from various festival directors, fellow filmmakers, students, I wouldn’t still be doing what I’m doing.”

But how did Millard work with Bucsi accounting for the fact that they have such different dynamics?

“Réka is one of the most talented independent animators around, so to be asked to collaborate with her was super nice. The film we have made really compliments both our styles and has been super fun to work on,” says Millard.

On the other hand, Bucsi says: “Although it might not be obvious when watching our films separately, there are slight, subtle similarities in the humour and timing so it’s actually been quite a natural process."

And how did she connect with Millard’s different style? “Oh, the whole experience was really fun. Indeed, Peter has a very different visual style, but we are quite similar in our humour and in pacing the films.”

Bucsi points out that working with Millard has been easy and extremely inspiring. “For the creation of Don’t Know Where Going, we first set up the rules and then basically played around animating each other’s lines.” It’s the first time that she has had such kind of collaboration, “…and it has been so refreshing in terms of creativity. I am thankful to VIS for having given us the opportunity to work our styles together.” 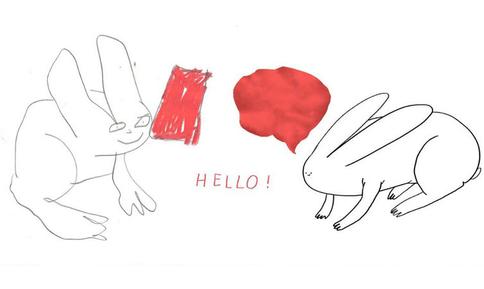