​ Visions on the Short film Program 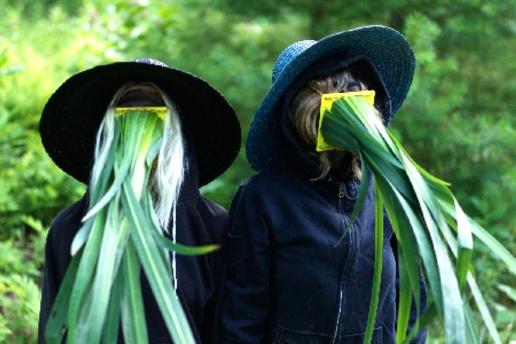 Night Soil – Economy of Love is the second film from the trilogy that Dutch artist Melanie Bonajo is working on, and as well as the previous one, it has been selected for the Tiger Shorts Competition program of Rotterdam Film Festival. The pursue of spiritual quest is leading Melanie again to the American scenery – this time discovering her characters in Brooklyn. The film portrays a group of local female sex workers and activists in both metaphorical and expressively physical way.

The women talking about sexual healing and nature are opening themselves to the artist's imagination involving touching odd-shaped vegetables, flower bath and a rainbow of layered bodies set against the famous bridge. In a way it actually serves as a reminder that these women are still living in a concrete jungle, while their experiences and statements about sharing, accepting, trust, and the power that belongs to their bodies are captured on video against the background of the forest, covered with snow or seen through the window. This choice of the setting insists on a romantic perception of nature in general and stands for ideas of authenticity and freedom, visually supporting the discourse of sexuality´s liberation.

While forest, as a symbol of one's connection with energy, is continuously explored by Melanie Bonajo in her art practice, it is just one of the roles that nature can be assigned to.

In a broader context the outspoken wisdom of re-discovered femininity is contrasted with confusion and a desperate hope expressed by young African men in Tout le mond aime le bord de la mer - another film from Tiger Competition. Directed by Spanish filmmaker Keina Espiñeira and nominated by IFFR jury for European Film Awards this film also approaches nature as an immersive and influential force. First comes the forest as a hostile environment where people have to struggle for their lives. Then the ocean as an open stream of possibilities, as well as a physical border between present and future for those who strive to escape from their country, and a separation mark of present and past for those who managed to cross it safely.

'Boubacar, did you like the sea?' asks one of the characters looking at the milky water-scape. And his friend answers - 'We all love seashore'. A fragmented conversation is happening in a group of men watching the waters and sharing advices about how to behave with CETI and the guards when they arrive, telling stories about the brothers who disappeared while crossing the sea and others who had to hide in the woods and die there cause of medications absence.

In the woods, between the massive trees and shallow swampy lakes there is a setting where Keina films her characters while the shadows play on their faces. As an old folk story, dating back to white colonialists appearing in Africa, says – the woods might also be a cursed place, where a white devil incarnation can appear riding a bicycle. It serves as a collective memory container and a landscape for personal experiences to take place.

'Does this film have a script or not?' is a question that one of protagonists asks to the filmmaker. And in the same way you may wonder – does an immigrant's journey over the sea have a certain script? The changing colors of waves and the beach with fine sand is a beautiful place to be as everyone agrees, but we don't know which side of the water these young men are actually facing. And in a future scenario when safely arrived to the opposite shore, a single person standing next to an industrial cistern or, perhaps, a wall of the center for immigration looks so small and fragile, listening if someone would call his name.

It is easy to some extent to make a comparison between Western and non-Western problematic, between spiritual and survival needs contrast opened up by these two films. But what's more important that both work in their own ways, whether it's humor and straightforwardness of nudity or lyrical and metaphoric storytelling. And the conversation bridging these films is about freedom and trespassing the borders, the ones that are physical and emotional or geographical and political borders.