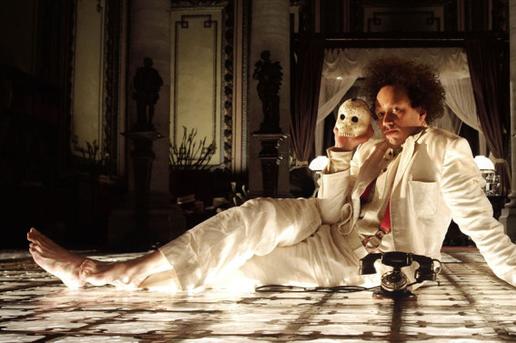 As unsung heroes go, British director Peter Greenaway has more than enough excuses to reclaim a top spot. For decades now he has been at the forefront of the European film scene, and despite some occasional secondary recognitions, and a small yet dedicate group of followers, he is one of the most often forgotten great masters of contemporary film. Works such as The cook, the thief, his wife and her lover, Drowning by numbers or Pillow book may all be landmarks in one way or the other, but a major critical and commercial success continues to be a mere illusion in the horizon. Eisenstein in Guanajuato threatens to be the final attempt by the filmmaker, yet despite all its skill, it could very well go overlooked when the time comes for it to shine high. A pity it must be said, because from his long and distinguished filmography Greenaway has never been involved in such a tight, ambitious and extravagant project. The film reveals to us all the colourful and grey details of the extraordinary and surprising visit to Mexico by the legendary Russian filmmaker Sergei Eisenstein, who first moved to the region to  shot a film based on Emiliano Zapata´s revolution. Eisenstein´s exuberance was certainly notorious, as well as his dubious sexual history, frequently suppressed and kept away from the public´s eyes through years of censorship. Greenaway finally brings it to the centre stage, dominating almost entirely this portrayal of the Russian filmmaker´s jaw dropping voyage of self discovery and debauchery in an exotic land, that quickly turns into a indulgent circus, reflecting with great accuracy the escapist nature of an unique artist. Having said that, politics are surely never fully absent, they are fully set as an unwanted background, just like in real life, much to Eisenteins´ annoyance.   The result is a work that is as provocative as humorous and thoughtful. Never in a gratuitous fashion, the sexual escapades of the protagonist occupy a privileged place. In one particularly long and daring scene, where olive oil is put to a new and creative use, we are presented with one of the most blush inducing exposé of homosexual intercourse in film history. Perhaps the greatest virtuosity of the film, and also the main aspect raised by its critics after the premiere at this year´s edition of the Berlinale, Eisentein in Guanajuato stands out for its technical  genius. The editing by Elmer Leupen is simply remarkable, forcing a fast and insane pace to this bipolar story, while the cinematography of Reiner van Brummelen tightens this psychosis into a work of art with few parallels. Adding to this, Elmer Back´s performance is courageous to say the least, portraying the Russian artist as a troubled, raving lunatic with a keen sense of humour and delivery. Too much for some people no doubt, but it could hardly be more fitting to the story. To what extent this portrayal historically accurate it totally irrelevant. This is not a story about the man, instead this is a vision of a legend, and as such Greenaway signs one of the most magical and enthusiastic visions of a pioneer ahead of his time, lost in a sea of doubts and  repression but also charged in lust and an insatiable thirst for spiritual quests.