Paula Ortiz’s second feature had it’s international premiere at the 19th Black Nights Film Festival in Tallinn, after it’s first appearance at San Sebastian. A visually interesting adaptation of Federico García Lorca’s play Blood Wedding tells an emotional tragedy through a range of symbols and original verses. A slow-motion tragedy in a dance atmosphere with the sweet-sour taste of an overloaded romance.

The whole story of The Bride is centred around a wedding and the emotional struggle of the future wife. We follow a universal and familiar tragedy: a woman is about to marry, but instead of her husband she desires somebody else, Leonardo, who is already married himself. All those three figures spent their childhood together, forming a strong friendship triangle. However, The Bride seems to accept her fate and tries to be happy with The Groom - until Leonardo appears at the wedding and re-evokes a storm inside her.

Ortiz adapts the, especially in Spain, well-known tragedy Blood Wedding of Spain's most celebrated writer, written back in 1932. The dialogue consists of original lyrics and brings a melodic language into the lines of the scenes. Ortiz tries to display the play’s poetic elements by creating symbolic and highly stylized images. A colour-grading in pale, light brownish tones, cinematic strong contrast and a lowered saturation create a big production look. And indeed, The Bride is a Spanish-German co-production, which was actually shot in Turkey – visible through the landscape, which we get to see in picturesque long shots.

Combined with music of the original play, string-dominated, orchestral pieces and the sound design, the pictures are obviously supposed to build up tension and evoke emotions. Together with slow motion compositions, the audio track can, at first, achieve this effect on the viewer. But after two thirds of the movie, the latter stylistic element are repeated all too often, limiting their efficiency. The climax is also dominated by dense slow motion movements, and, in this sense, the film loses it’s impression. Another point worth mentioning is the fact the scenography is shining, sometimes more and sometimes less, of kitsch and pathos.

However, to a certain degree Ortiz succeeds in captivating the viewer’s curiosity, which is especially interesting for those familiar with the story: the first half of the original last scene functions as opening for the movie. After that, a row of symbolic, figurative formations already tell the essence of the whole narrative. For example, the three friends appear as youngsters next to their families facing each other in a deserted, vast field. In several other scenes the mysterious appearance of an old woman gives warnings, interferes into the action or simply asks questions. A row of symbols enrich the plot and a lack of additional side-narratives prevents a distraction from the central tragedy of the protagonist’s dilemma.

The Bride, who suffers, remembering the irreversible past, is acted by Inma Cuesta, who, like the rest of the cast, tries to find a connection to the audience, despite the lyrical construction of the original verses used for the dialogue. Emphasis is lying more on the actor’s dance choreography movements and their functioning on a visual level, instead of a development of the characters. There is nothing too special about them. Like the exemplary, or better to say, stereotypical figures, the story in it’s core could be set at any time and place. The director leaves a clear definition of the temporal context open, although it’s supposedly set between the thirties and seventies in a rural environment.

Paula Ortiz and her crew created an atmospheric piece, that is visually impressive but partly overloaded. The characters mainly serve a visual purpose: The Bride may represent a proud woman, but the men around her suffer of cliché appearances. Nice, though, is the idea of telling the story of this famous play in a strongly visual way. Even those who are not fans of romantic tales and are allergic to kitsch, can, at least in the beginning, still find something interesting in this adaptation.​

"The Bride" by Paula Ortiz (Spain/Germany) 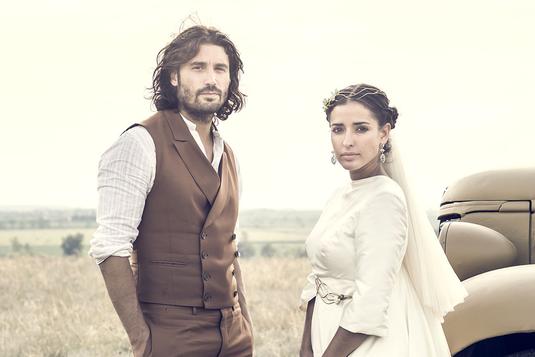