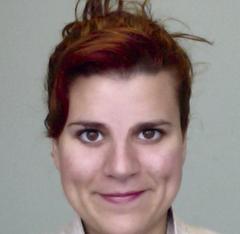 Anderson in her new autobiographical piece creates a vivid and intimate film diary, but it’s much more than a personal visual essay – this work can be seen as a diagnose of the contemporary human condition.

American multi-artist, Laurie Anderson, isn’t afraid of creative experiments, neither of mixing media and techniques. No doubt that Anderson is recognized as a performance artist, musician and composer, as  her film echoes these experiences from the very beginning. In Heart of a Dog she puts herself in the role of a narrator and  guide to the internal world of her stories, thoughts and feelings. We travel through fragmented memories and dreams, which are represented by multiple kind of materials such as animation, documentary, YouTube videos or other home footage. The story isn’t linear but rather seeks to imitate human perception and memory. The most significant character is with no doubt Lolabelle – the artist’s dog and her favourite companion.

Andersons’ friendship with Lolabelle constitutes her way of seeing and describing the world in post-human categories, where purity and honesty of this interspecies relation brings mutual trust and stability. This aspect is presented in  contrast to the contemporary world and its dark secrets, where an idyllic life is unsettled by unknown threats, the US is presented rather as a land of uncertainty and sudden danger. Anderson proved here that she is a great and clever observer, who knows how to alarm the viewer very subtly. The narration smoothly circulates from her intimate zone to overall observations and thoughts of political context, following those traces leads us to worrisome questions. We get a closer look on 9/11 consequences, but from a humane perspective of everyday life, which is surprising and atypical, but very accurate from individuals perspective. Crucial questions appear suddenly and they focus our attention on various forms of control, but then Anderson leaves us just with a hint, sowing the seed of insecurity.

It has to be said that director found touching and convincing way of expressing universal fears, by showing a position of critical individual in the context of global issues on one site and existential angst on the other. The action develops slowly and follows the stream of consciousness, but it does not necessarily lead the viewer to a feeling of loss. The structure of the film represents the complexity of human sensorium in a very unconventional way. This  is worth appreciation but in the same time, certain parts seem to be overloaded by postproduction, like numerous scenes with colourful filters. Very wide range of effects sometimes doesn’t work for this piece and may become annoying after a while.

Heart of a Dog has a very unusual narration, which can be found pointless by viewers looking for a traditional plot. Creative footage montage in combination with electronic music ensures truly immersive experience. There are numerous aspects what make this work exceptional from technical proficiency to attractive intelligible philosophy, but eventually the director kept it all very coherent. Anderson risked by revealing her sensibility and creating a project based on private (often intimate) experiences, while her authenticity followed by formal adequacy, helps the film to conquer hearts of the audience.